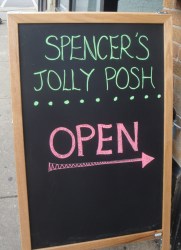 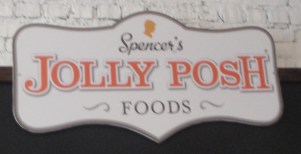 That shop is Spencer’s Jolly Posh Foods shop and it is full of all those necessities from back home and perhaps things that you dont really need but that you want as soon as you see them. Sadly you have to time your visit as it is only open on certain days. But trust me if you need or rather crave something they probably have it.

I hope that you don’t judge me too harshly in terms of the gourmet contents of my basket on this shopping trip. 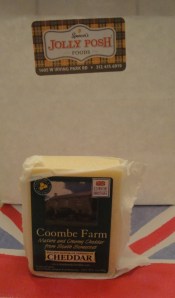 So my first items into the basket was some English Cheddar from Coombe Farm and a tin of Heinz Spaghetti. A strange selection you may feel and perhaps you will think it even stranger when you see what I do with them.

This is my favourite comfort food a dish invented one family christmas when we could not decide between cheese on toast or spaghetti on toast and yes I am pretty sure we were about 13yrs old at the time. If you get the right cheese and bread and the spaghetti sauce melting into the sandwich you have a taste sensation on your hands. It is so easy to eat far too much of this sandwich.  As Marco Pierre White pointed out ‘if it speaks to you then it speaks to me’

Another thing I just had to add to the basket was some English crisps and not the classic Walkers crisps kind, no the ones that even some of my Ex Pat friends will turn their noses up at. Both of these have been staples in the playground, as a breakfast at college, and even now a much sought after erm can I say delicacy? Probably not.

So Wotsits these are pretty much cheesy puffs the sort that turn your fingers orange with colouring. Monster Munch now these are a beast all of themselves, my personal choice is the pickled onion flavour, which to be fair is probably as disgusting as it sounds, the flavouring generally burns the roof of your mouth but despite that I cannot get enough of them. I remember these as “The Biggest Snack Pennies Can Buy”.

I have not eaten a Pot Noodle since I was a student, and I think bought this pretty much for the bragging rights. I was really surprised to see a whole set of shelves of pot noodles in Chicago. I urge anyone nearby to go and try one and have a cook off with Mr Ramen. When I was a student there was no “Bombay Bad Boy” and if there had been I would not have dared to eat it, way too spicy, this was years before I started travelling and I was not even sure where Asia was back then, it was just where the hippy drop outs were heading (I wish I had gone with them now). The three flavours I remember well were; Beef & Tomato (brown), Sweet & Sour (light blue), Chicken & Mushroom (green) the colour refererring to the packaging not the food! The Pot Noodle is produce in Wales UK a classic advert http://www.youtube.com/watch?v=JrNuT9sn0Gc depicts this. 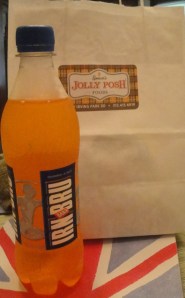 So now I needed some drinks, and the first choice was one that I have not seen for ages and that was a can of Shandy Bass, this is basically a a carbonated soft drink that does conatin 0.5% alcohol, it is a Shandy which is a mix of beer and lemonade. in England when I   was a kid it was as cool as Top Deck Shandy or Lager and Lime to drink, did it make you look hard? Not really and perhaps giving us kids a taste of beer early on in our lives has some bearing on our pub culture. No different though from the French giving kids wine with water at lunch. My second choice was a bottle of Irn Bru, a drink I fell in love with while living in Scotland, it is a great hangover cure and best of all it is ‘made in Scotland from girders. 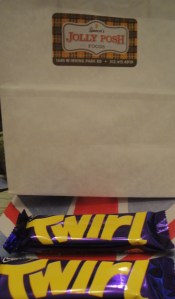 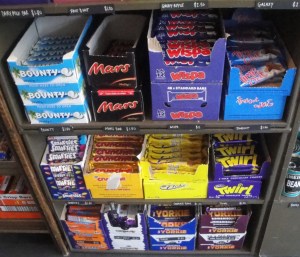 Jolly Spencer has a lot of English Chocolate, and the real stuff, not the stuff made by Hersheys over here that just tastes awful in comparison. In amongst those shelves was the bar that I always bring back for the girls at work on my trips back to the UK. That bar is the Twirl bar. The Twirl is a flake type chocolate bar covered in a wrapping of chocolate. The air between the layers gives you a greater chocolate to mouth ratio, terrific is the only way to describe it. It is that good, that on my last trip back to the UK I brought a whole case back to be shared between three people.

Apart from all the stuff I got at Jolly Spencer’s there is loads more, from tea, biscuits, jam, bread, bacon, sausage, and black pudding. You really need to go and check it out.