The Real Kitchen tagline is “Food your mother would cook if she’d been to culinary school“. I am just putting that out there as I know my Mother reads this. I have had Real Kitchen on my radar for some time now, but this week it came up in conversation both with a work colleague who had newly moved into the neighbourhood and my upstairs neighbour, so I thought hold on I can’t be the last person in the district to visit the place. I had an abortive trip midweek in search of some gumbo, but they didn’t have any, so I decided to save my next trip for the weekend. The basic premise of the place is that they prepare an assortment of choices that you can take home to heat up at your leisure, they also are feted to make some jolly good sandwiches, so my mission this Saturday was to try both, a sandwich for lunch and something to eat for dinner as well. 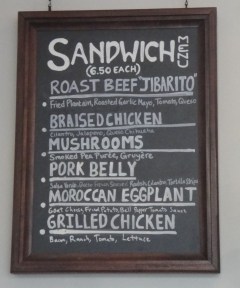 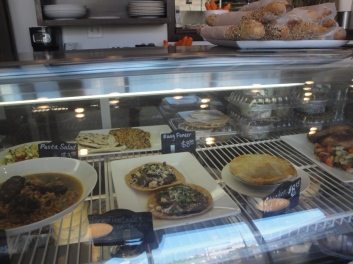 From the sandwich board I was pulled towards trying the Pork Belly sandwich, this was accompanied with the fillings of Salsa Verde, Tortillas, Radishes, Queso Fresco, could be interesting. From the prepared meal selections I was drawn to the chicken pot pie always a good choice. What I do like about this place is that they have example plates of everything that they have prepared that day in the counter and they also advise you how to heat them up as well. The daily menu choices are also on their website which is updated daily, and if you are too lazy (or busy maybe) to turn up and make your selection they also deliver. 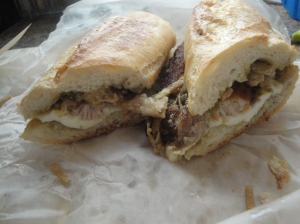 First to be consumed was the Pork Belly sandwich, the pork belly was really good, crispy, juicy, fatty, and moist. I am not sure about the other fillings, it all seemed to work as a flavour but I could not really pick them out as described. My other thought was that the bread was too hard and crunchy for this sandwich, don’t get me wrong it was a really nice crusty roll,but to complement the crispiness of the pork belly I would have liked a softer floury roll. Really good pork though and a damn fine sandwich, I am just being picky.

The Chicken pot pie was equally tasty filled with a creamy mix of chicken, carrots, peas, onion, and celery, there was a lemony taste, I am guessing lemon thyme, but really that is just a guess. The Pastry was very neat and tidy, and it was not just on top so you got a nice soft bit of pastry where the sauce was in contact.

Located in the strip mall on the corner of Montrose and Clark at 1433 W. Montrose Ave. Also on facebook, twitter and the web at http://realkitchenchicago.com/