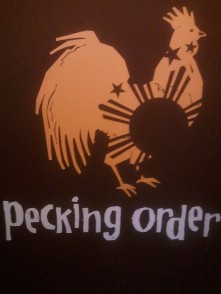 So as you walk into the Pecking Order on Clark Street you are left in no doubt as to what this place has to offer.

Pretty much “Chicken Every Which Way”

Now I had done my homework on this place, I spotted it as I walked over to the Target store at Wilson this past holiday weekend and had googled the menu on the web. The first item that caught my eye was the “Pinoy Eggs” which are described online as “5 minute egg wrapped with house made longaniza, then breaded and fried” Hum now that sounds familar, once I had googled ‘longanzia’ and discovered that was a type of sausage I was pretty sure that this could be a variation of a Scotch Egg. Well if you have read any of my blogs before you may have noticed that I have a minor obsession with Scotch Eggs, so I really had to head up to the Pecking Order to see if my hunch and my hopes were correct. Once I had a chance to talk to the super friendly host and asked about the Pinoy Eggs, after some considered description he finally splilled that they were a homage to the Scotch Egg (OK maybe he did not say ‘homage’ but I knew what he meant). Essentially it is a Filipino Scotch Egg.  So OK lets get started I am having some of those.

I only have one question here, now you get three pieces, that is three halves, and there was no-one else in the place having a scotch egg (I mean pinoy egg) so who got my other half? Lets be honest if I was the chef  I would be playing that game as well, “one for you, one for me….” So what can I say about the egg? really really quite good, and if I was to state where it came on the ‘Pecking order’ of Scotch eggs (Pinoy if you like) in Chicago, well it comes second on my pecking order, which is a pretty good place to be. Only trumped by those made at Pleasant House bakery, and you are going to have to be really good to beat theirs (and that is another story). BUT these are the best Pinoy Eggs I have ever had.

Even though I had just gobbled down those breaded eggs, I felt that I could not leave without trying some chicken. I had three basic choices; grilled, fried, or roasted. All three were marinated overnight in tamari, sugar, garlic and bay leaves. I decided to go for the slightly healthier option of the roast chicken which was ‘stuffed with lemongrass and ginger, slow cooked in the rotisserie and basted with annatto-calamansi butter’. It came with one side so I just took the simple option of some Garlic Fried Rice, or so I thought, described simply as ‘Fried rice with toasted garlic’ I did not even bother to take a snap on my camera. It was however really quite nice, crunchy garlic bits in some slightly sticky rice. But the main business of the evening was that chicken. A really nice crispy skin with a quite subtle flavour not quite spicy, not quite sweet, but somehow both at the same time, covered some really juicy chicken that almost melted off the bone, even the breast was still moist, but I liked the brown leg meat better. Oh and as an added bonus the whole meal was accompanied with a selection of house sauces, my personal favourite being the “banana ketchup’ which was made principally of banana, soy sauce, ginger, garlic, and some worcestershire sauce, tart, tangy, mildly spicy, a great combination.

I often say that I will be back to eat somewhere and rarely do I have the time to make it back. I hope that this place is one that I can make it back too on a regular basis, apart from the really tasty chicken, the excellent Pinoy eggs, the super friendly owners and staff, I looked on the menu and saw that they also have Metropolitan Krankshaft Kolsch, and Goose Island Green Line Pale Ale on draft.  I have a feeling in my bones that both of those will go nicely with one of those Pinoy Eggs!

Oh I did I mention that there chickens are all from the farms of the “Freebird” antibiotic free chicken? that will please some of my twitter peeps that I have met.  http://freebirdchicken.com/