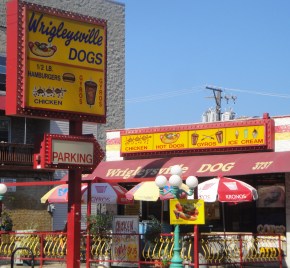 What would Chicago be without the hot dog and the cubs? You can get both on Clark Street in Wrigleyville.

Wrigleysville Dogs proudly claim to be serving the official Hot Dog of the Chicago Cubs.

I suppose I could have gone down the route of the traditional Chicago Dog, and maybe given the location I should have done, but to be honest I was more in the mood for some solid sausage so I went for an Italian Sausage with sweet peppers instead. The sausage was not bad, not too spicy and well cooked, as usual the bun fell apart mostly due to it having been dipped into the gravy before serving, but that was nice tasty bonus to add to the enjoyment. The peppers were really nice and sweet even the green ones. It was not the greatest sausage but it was good enough for me at that moment in time and it was good to sit out on a nice day in the middle of Wrigleyville

Wrigleysville Dogs is located at  3737 N. Clark St and it about 5 minutes walk away from Wrigley field and the Addison red line CTA El stop. You could also get the CTA 22 bus which passes by on its way along Clark Street. Website: http://www.wrigleyvilledogs.com/