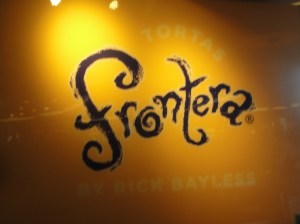 I don’t usually look for any breakfast when I am passing through O’Hare but this week I was going from terminal 3 over to New York and I had an hour to spare. Walking up towards the Food Court somewhat fearful of what might await my tastebuds and early morning stomach I was pleased to see the sign for Rick Bayless’s Tortas Frontera. I knew it was there, but I just had not remembered until that moment.

I was quite tempted by the Mollettes that were protected by some drool resistant glass, but to be honest they looked to be a bit rich and cheesey for a pre plane flight snack, and I was looking for something a little plainer. Something plain for the plane. That could be an advert for some really awful food court at the airport. “Bland Burgers and Bland Bagels” – “Something Plain for the Plane” OK I am copywriting that one.

As this was breakfast time it seemed more sensible to have a breakfast Torta, What’s that? I heard myself ask, well it is a griddle-baked Mexican sandwich. There was quite a selection but I was playing this very safe and I ordered an Egg and Bacon Torta,  comprising scrambled egg, Nueske’s bacon, chipotle, Chihuahua cheesea and avocado for the sum of $9. I dont think that they were that impressed when I asked them to leave out the chipotle, but it was still pretty early and I did not need any early morning kick to my senses. Well was it any good? I will say that apart from the fact that it was way too big and I could have easily shared one between two, yes it was good. The bread looked hard but it was nice and soft, the eggs were perfectly creamy and not dry, the bacon had a nice smoky taste andwas a little bit salty just as I like it.

The other nice feature of this establishment, that I really like, is that they have a board telling you where the ingredients were sourced from. The applewood smoked bacon came from Wittenberg, Wisconsin, the Chihuahua cheese came from V&V Supremo in Chicago. There is a full list on the website as well if you want to check out the full details of your meal, well lets face it, it is much better than checking your departures on your iphone or watching the departure boasrd screens for your delayed flight.

I would eat here again when I am waiting for my plane, lets hope I am at the same terminal next time.

There are two locations at Chicago O’ Hare airport, this one was at Terminal 3 K4, there is a second at Terminal 1 B11. If you dont want to use a plane to get there you can ride to the end of the Blue Line to O’Hare and if you have a ticket you can stop by.