Prost sits beneath the CTA Train Line at 2566 N Lincoln Avenue just between Sheffield Ave and Wrightwood Ave. It is a German style beer hall that recently re-opened on May 31st 2012. I was just passing by heading up to the end of the Taste of Lincoln Avenue on my way to Etno Grill, when I was distracted by a menu sign listing the Kasekrainer Sausage, well when I say distracted it was a stopping me in my tracks moment. I had one of these during a recent trip back to England, where I was checking out an Austrian sausage shop in Bakewell Derbyshire,  and I was hooked on cheese filled bratwursts after that.

You can sit outside the bar on the benches and drink good beer as the el train rumbles by overhead, well when I say rumble I really mean screeches, crashes, and roars by. just concentrate on the drink as you will not be able to concentrate on much else. It’s a great spot to drink with someone that you don’t want to have much of a conversation with or a place to practice your sign language. 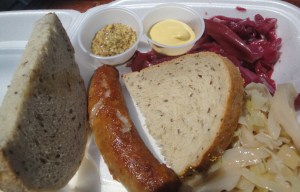 Back to the task in hand, namely eating some Wurst. The Kasekrainer sausage is a variant of the Kranjska klobasa which is known in Germany as the Krainer Wurst. This typically contains small chunks of  cheese, it is best to  grill these on a low to medium heat otherwise the outside is burned and the inside is still cold. You also can’t pierce them when you cook them because the cheese just oozes out. This one that we got from Prost was almost cooked just right, but I could see a few places where they had committed the cardinal sin of pricking it as you can see the emmental cheese escaping the casing  in some spots. The sausage is essentially a wurst filled with a combination of a veal and pork. It was served with Bavarian Cabbage, Red Cabbage, Two excellent Mustards (the whole grain was the best), and a couple of pieces of Rye Bread. I was not too keen on the cabbage, the big bits were verging on the hard as opposed to crunchy, but really to be fair I was only really interested in the sausage and that was the star of the plate.