I haved walked past Lina Pita a number of times and from the outside it really does not look much. However there was this picture in the window of  a tagine that always caught my eye.

So in the mood for something in a bowl I made a special trip over to Belmont to see if their claim to serve authentic Moroccan Cuisine was true.

Having said that I have not been to Morocco or know any Moroccan people, so I guess what I am saying is ‘what I imagine to be authentic Morocan food’.

As you walk through the door you are greeted by a lilt of moroccan music and quite a chilled cafe feel. It appeared to be run by a family group, Mum, Dad, Son and Daughter taking on all the key roles.

I looked at the menu briefly but there was only one decision to be made and that was what type of tagine to have.

The choices were Lamb Shank, Lemon Chicken, Fish, or Artichoke. Strangely enough the Artichoke on close inspection was not vegetarian rather it was beef with peas and artichoke. 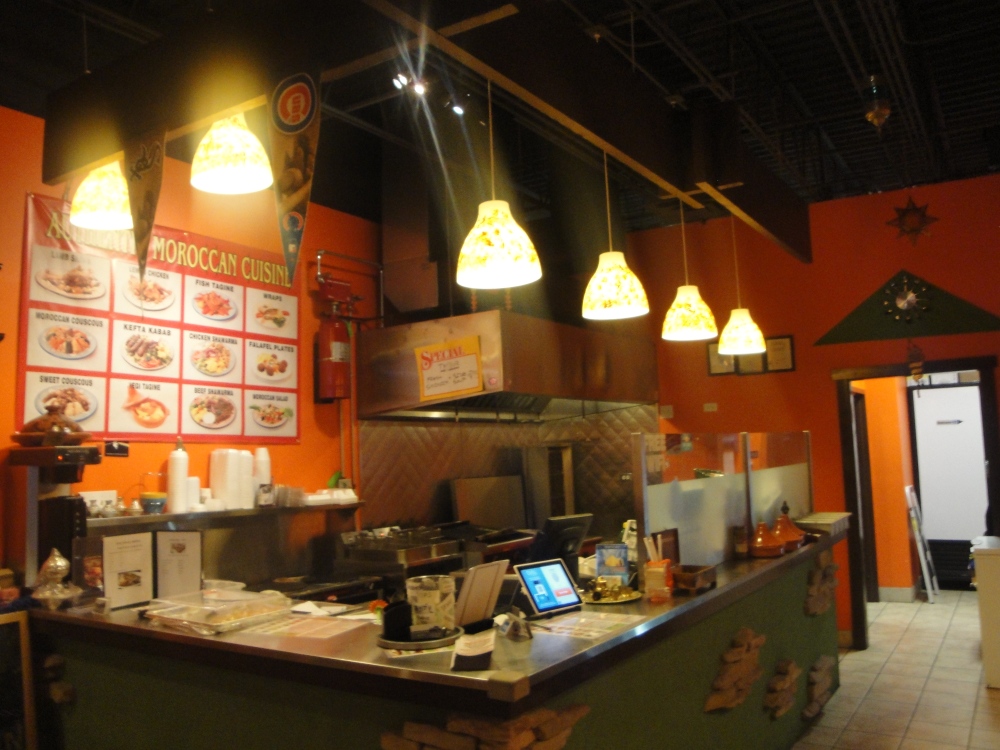 In the end I was drawn to the Lamb Shank as I love having that anyway and I was curious and somewhat excited to get a Moroccan version.

The menu description was “Moist, marinated in our special blend of herbs and spices and slowly braised until just about falling off the bone; served with saffron and toasted almonds in saffron sauce with Moroccan white honey and sweet prunes”

It did indeed fall off the bone and it was very tasty, not spicy more of a warming herb background. The meat was a little fatty but it was that really good fat that you want to eat that just slides off the bone with the meat and adds all that flavour.

The sauce was a thin gravy and what looks like mushrooms scattered within was actually a prune topped with an almond. That itself was an interesting combination. The dish came with a starter of pita with a rice salad, I saved that and used the pita and rice to mop up the gravy juices at the end.

Overall I really enjoyed this and I am keen to try one of the other tagines on another occasion. When you walk of the street you are instantly transported from the streets of Chicago to a little backstreet cafe in Morroco.

Located just along from the Briar Street Theater, you could take in a Blue Man Group performance on your way as well, or just have a little taste of Morocco as I did.

location: 3113 N Halstead. Close to the Belmont red/brown line stop, but also in walking distance of the Wellington Brown line too.