On the search up the Brown line for places to eat, one of the stops I had not yet visited was Rockwell. The El Stop is on N. Rockwell St and they are a couple of obvious options near to it; Rockwells Neighborhood Grill, and the Pizza Art Cafe, but as an Englishman I was in the mood for something a little more homely and the sight of an English Pub the Red Lion was just too much to resist. 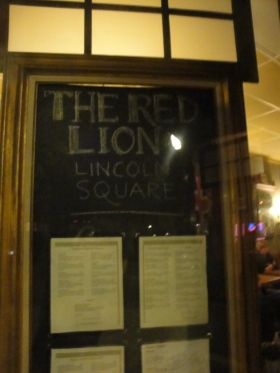 Inside it is the closest to a traditional English Pub that I have seen in the states, most fall into the trap of duplicating one of the many themed London pubs which don’t really represent the English Pub at all. What you really need is a surly barman, a miserable owner, and some really bad food. Sadly this was the thing lacking at the Red Lion, the owner was very friendly and the young lad at the bar also seemed cheerful. There was a selection of hand pulled beers, a rarity I have found in the city, and they were not half bad, some real ales don’t even travel across the UK let alone over the states so this guy knew how to keep his beer.

The menu had a number of English dishes and I had to try the all you can eat Fish and Chips special just as it is an easy benchmark on which to judge any British pub.

It was pretty good, the fish was moist and flaky and the chips were nice and chunky and it came in a basket which is so retro (although I expect accidently so). I am not sure what they were coated in but it was tasty. The tartar sauce was good to dip in, but the coleslaw was just wasted on me. Why does Fish and Chips need coleslaw anyway?  I have never been given it in any Fish and Chip shop I have ever visited in England.

Best of all I got to share my supper with the Queen, always a total bonus!

The Red Lion was a pretty authentic experience, way better than the loop attempt of the Elephant and Castle which to be fair does succeed in serving good beer with awful food (but I still eat there as it is typical english pub food which generally is not that good).