I have several reasons for coming to Chubby Wieners, it meets my first criteria in this project in that it follows my mission to eat near every station along the Elevated Line.  It is situated below the tracks almost adjacent to the Western Brown Line station at Lincoln Square. You can almost touch Chubby from the platform. 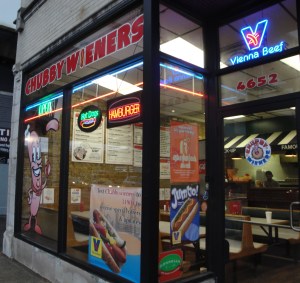 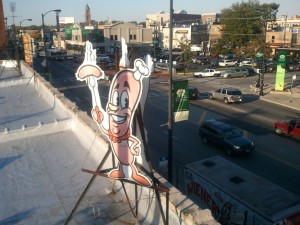 Secondly, they made the effort to chubby it up with a couple of inviting specials. I chose both!

The first special was a New York Dog, as pictured below, it was topped with a soft blanket of thinly chopped sauerkraut which was moist and sweet.  This could have been an overwhelming cover but in the end it wasn’t, complemented by the spicy mustard, the dog  just about won his battle not to get lost underneath. 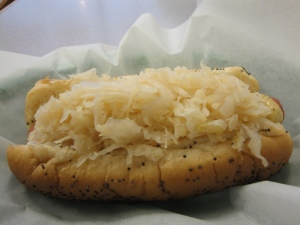 The second  special was a  Cajun Creole Dog, this was a spicy andouille sausage which had a nice chorizo style chunkiness and spicy flavour , it was topped with red and green sweet peppers which were both crunchy and juicy. The chunky onion strips that intermingled within the topping was another nice bonus as they were all freshly cooked and had a nice texture. The crusty french roll was really needed to hold this beast together and it undertook this feat with no problems. I really enjoyed this dog and hope that it is a regular feature at Chubby’s, just not so regular that it loses it lure of being ‘special’ 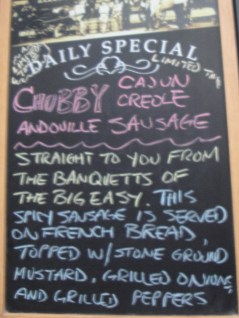 The final reasons to go to Chubbies is for its fun and semi serious approach to the dog, not just a great name but they extend that into the menu choices and interior too.

And by no means least the exciting news for the chubby lover is that they are soon to branch out onto the streets with their own food truck sometime in the coming months. 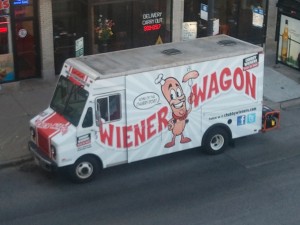