Bright shiny lights and flashing signs are often my downfall, like a moth drawn to a flame I often seem to find myself walking into one of these hot dog or burger places purely down to the exterior signage. It is usually a trap, although an inexpensive trap so often I do not mind. 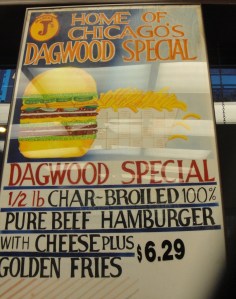 Again another trap that caught me! Inside Mr J had a board advertising his “Dagwood Special” and on paper or rather on the board it all sounded fine. I mean a half pound char broiled 100% pure beef hamburger? sounds good to me, so lets just see how it actually turned out.

On paper, or in this case on paper plate, this should have been a winner. It tasted fine, it was just a bit basic, and dare I say cheap? Now there really was not anything wrong with this burger, it’s just that for the same price or cheaper you can get something better, with better quality ingredients, and with more charm in many other places in Chicago. As I said in the tag – “Define Special”

Having said all that, while I was there a homeless guy came in somewhat down on his luck and he only had a couple of dollars. The guys here still gave him a meal, so I have to commend the place for that. A nice gesture in these times of hardship for many.

Mister J’s is located at 822 N. State St near to the red line at the Chicago stop, between State and Pearson Street.