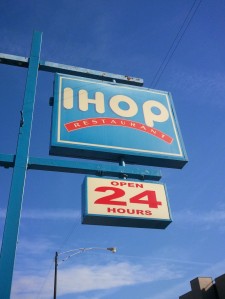 Some days missing the train can be a blessing and some days a pain, but on this occasion with the sun shining in the brisk cool air I was happy enough and spotted a IHOP sign in the distance and thought…why not? It is not really somewhere that I would ever have planned to go to, in fact it is more like I have actively planned not to go there. Despite the somewhat amusing name of International House of Pancakes, shortened to IHOP, which is often enough to make me curious. I never have been thus far. 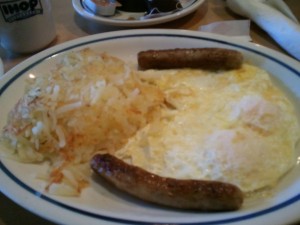 But I was hungry, there is nothing else up by the Montrose stop that I have not already tried, and this just seemed a chance to make the most of a bad situation. The picture actually looks tastier than it actually was. I still cannot believe that I have the audacity to even blog about it. But I had to suffer the plateful so I just need to share a little of the pain. It wasn’t that bad, just a bit pricy for something so basic. At least now I can say that I have been. There are so few options up at the Montrose Blue stop that its probably this McDonalds or something from the gas station.