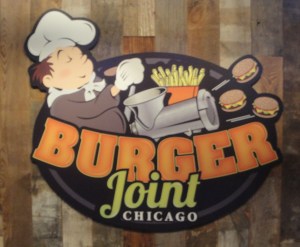 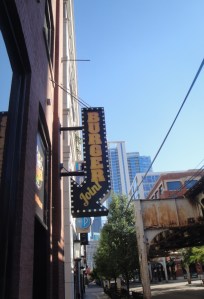 Walking along beneath the Brown Line track between Merchandise Mart and the Chicago stop I came across a sign for the “Burger Joint” pointing me down into a basement resturant. So I felt it would be rude not to take up that invitation so I headed down the steps to see what sort of burgers this place had on offer. 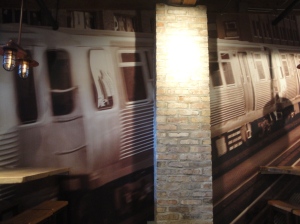 Once inside the first thing that struck me was the wall decorations which were covered with photographs of the El Train from ceiling to floor. That was my kind of wall paper and a perfect combination for me, Elevated train and food combined. But the main question on my mind was could the food match the decor? 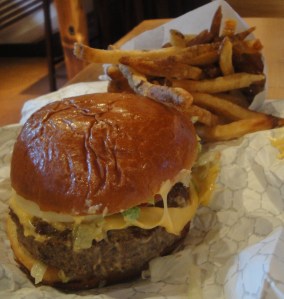 For some reason even though I was eating in they wrapped everything up into paper bag, they only use I could find for the bag was to take a photograph of it and since that contains all their contact details I suppose it did have some use. But what about the food you ask, do you sense that I am delaying the story? Given the decor I so wanted it to be the best burger I had eaten or at least really high up on the list. It was OK, nothing was really wrong but I think I would have enjoyed it more if the place was busier, by which I mean that I was the only person in there, my fries were cool and a bit dry . Wrapping the burger up had made it looks a mess, the burger patty was a bit squashed and I was not sure about the contrast of cold salad on the hot burger, it seemed to cool my meat down too quickly. It tasted OK though and there was nothing fundamentally wrong with it. There is a poster at the door of an award for a late night eating place. I can see that, it is probably pretty decent late in the evening. but for a Sunday afternoon maybe not the best of choices to visit. Rule 1 was always go where the crowds are.

Located at 675 N Franklin St, alongside the el track as it weaves its way out of town towards the Chicago Brown Line CTA El station.