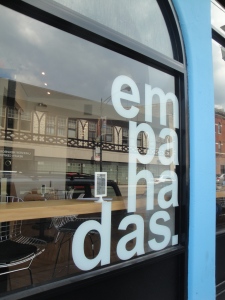 OK so my blog title for this store maybe a bit out there, but really it is a tribute to the story of how this truck and shop are named. The Argentinian inspired Empanada shop is named after the dialing codes for Argentina and Buenos Aries which is 54 and 11 respectively. This was my first visit to their new store although I have encountered their truck before. Actually it was my second visit, the first time was on opening day and it was too busy to get into the Store front, but this was my first visit to munch.

Inside the 5411 Storefront you are greeted by a nice big chalkboard listing all of their different empanadas. They even have some that are not listed on the website. I don’t know if these are regular options or just daily specials. I think they must be regulars as they are also on their table menus which are a really helpful pictorial guide that lets you work out which of the empanada’s on your plate are which. An empanada’s spotter’s guide.

I like the way that they present the different empanadas on the tray if you eat in. Even if the tray of four we got to sample was a little bit bare. I felt that we should have tried more, but this was only intended to be a short interlude and a brief snack while walking through Lakeview.

The first sample was a Mushroom Thyme and Blue Cheese empanada – There was really a lot of  Thyme in this one, you could smell it and taste it quite distinctly. I liked the juicy mushrooms and I did not even mind the Blue Cheese even though it was not my first choice for a filling. It looked quite neat when cut in half and maintained it’s form without collapsing on the plate

The Malbec Beef empanada was quite a delight.  I was assuming that this was some beef, nicely stewed in a red Malbec wine, it certainly had the consistency of a decent stew and a lovely rich taste. It was a bit messy to chop in half. The beef did not want to be separated at all. I grabbed the extra bit of stew that fell out though so that was my bonus.

Named simply as ‘Beef’ – This was an interesting Empanada – 5411’s website described it as “Premium, lean ground beef slow cooked with the fines ingredients and the right amount of juiciness makes this the ultimate Argentine empanada. You would marry this empanada if you could, trust us.”.  I was not quite sure what I was expecting after the Stew like Malbec Beef effort. This one was more chunky meat and seemed to have some stranger ingredients.  I could have sworn that there was some egg in there, so we went to check with the young lady at the counter. Apparantly it had beef, egg, olives, jalopeno, and green onions. It was a bit spicy and also texturally quite a chunky monkey. I was quite keen on this one, but to be honest I would not marry it, but I might marry its slightly more robust cousin the Malbec Beef which was more like an English Pasty to my taste.

The Caramalized Onion empanada was a total mess after I cut it into two, the onion just oozed out everywhere. The 5411 website describes it as thus – “If you have a sweet tooth, this is your lucky day. This Napoleon of the empanadas is filled with sautée caramelized onions and parmesan cheese and is ready to conquer your mouth”. I have had this one before off the truck and it was my favourite at the time. I think it is a little better when cold as you get to taste the parmesan a bit better, and the inside gets a bit solid. I agree that it is quite a sweet one. I did not remember it being so sweet off the truck. But then again that was on a cold night down at Ethyls so memories faded by now.

I am a big fan of this shop and truck, it is almost on one of my beaten path’s when out on a weekend stroll, and if it was not quite on it before, well it is now

Located at 2850 N. Clark and easily accessible from the Brown Line or the Clark Bus