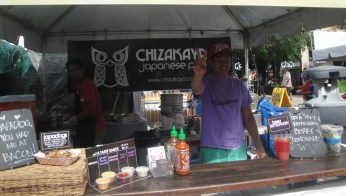 Chizakaya, a Japanese Pub was one of the more unusual food stands that I saw at the ‘Summer on Southport’ festival , and to be frank one of the most unusual I have seen for a while. They made a really good presentation of what they had on offer and they certainly seemed to have plenty of curious souls like myself stopping by to check them out. The guy behind the counter was also a pretty happy go lucky guy and more than willing to pose for a photograph in fact he virtually insisted on having one taken by giving me the V for Victory sign. 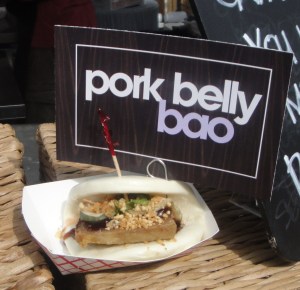 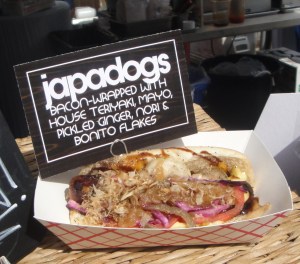 The counter had examples of everything that they had on offer, which was a nice touch, and I think that it definately encouraged a few of those that were curious, but slightly hesistant , to give them a try. The pork belly bao looked tempting but too easy today, so I had a choice to make between the octopus beignets or the Japodog. Well I didn’t have to ponder too long especially since the Japodog was a bacon wrapped hot dog. 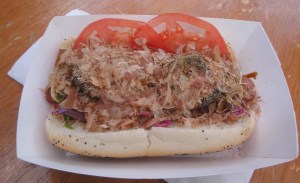 So to return the original question, “What is a Japodog?”  I suppose I could just post a picture of this sign to answer the question of what a Japodog is, but I felt that I should also buy one and taste it too just so I know if it is really any good or not. I suppose it does look a bit of a mess, the Nori and Bonito flakes were a bit much and kept blowing off into my beer. I really like the bacon wrapping of the hot dog and the house teriyaki, the pickled ginger was not too overpowering and the mayo helped to diffuse some of the other powerful flavours. It was a nice dog to try, but not sure if I want another one right now. I am curious to try some of Chizakya’s other dishes though so I will probably seek out their brick and mortar establishment which is located at 3056 N Lincoln Ave.

Travelling there by El requires a bit of a walk at the end, the Paulina and Southport Brown Line stations look to be the best options.