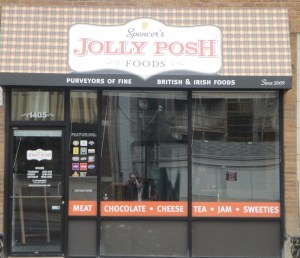 My first encounter with Nicholas Spencer was a couple of summer’s ago as I was browsing arouund some of Chicago’s farmer’s market hunting for some decent British style bacon. I had all but given up hope until I chanced upon his stall where he was selling packs of his own home made bacon and sausages. At that time he was selling through a few outlets such as Provenance up in Lincoln Square, but now he has launched his own shop up on Southport and Irving Park at 1405 W. Irving Park Rd. Website:  http://spencerfoods.com/ 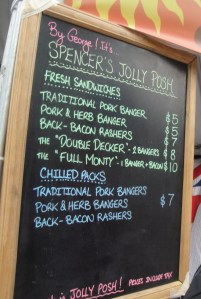 Today Spencer’s had a stall at the ‘Summer on Southport’ Festival , selling both sausage and bacon sandwiches, and also advertising the new shop. I just had to stop by and try one, in fact I had to go for a gut busting ‘Full Monty’ sandwich which was a combination of sausage and bacon for $10. 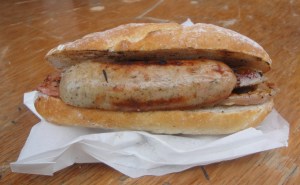 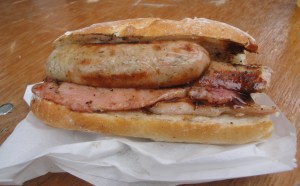 This was a great British sandwich, well it could not fail, great pork and herb British bangers, nice and herby, and some great British style back bacon. I had to adjust the sandwich so that you could see the  slices of bacon. I just had to add some brown sauce to the sandwich, not to add flavour, but because that is the tradition, and because they had some of the good stuff on the counter. I dont really have the words to describe how happy this sandwich made me, it was a little, or rather big, taste of home, and I am especially delighted to know that the the store is open so I will be heading up their midweek to have a look around and get some treats. 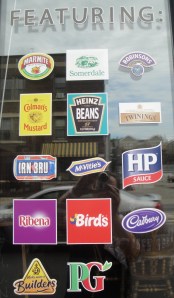 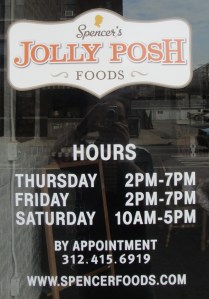 I walked up to find the shop and it is just on the corner of Southport and Irving Park road, by El it is probably closest to the Irving Park brown line station or the Sheridan Red line station.

This could well be my new hunting ground for my expat treats and necessities.