This unprepossessing shop front entrance belies what lies beyond. This was a total surprise of a place in the middle of a somewhat grotty section of the loop. Just a few steps away from the Adams and Wabash CTA el station is Max’s take out. Once you step inside the door you are greeted with a friendly smile and a slightly run down but homely interior. A whole load of classic hot dog posters line one wall, and the other wall is covered by a mural of the cityscape, pretty impressive and a nice surprise when all I was expecting was just another run of the mill hot dog place.

Carrying on my new theme of not just trying the basic hot dogs of the menu, I searched the board for something slightly different. Bingo, my eyes alight upon a small side board describing a Pastrami Burger. This was listed as a double cheesburger, with mozzarella cheese, lettuce, tomato and mustard topped with pastrami for $5.99. I ordered and sat down on one of their classic stools covered with a vienna beef hotdog picture. I really want this stool. 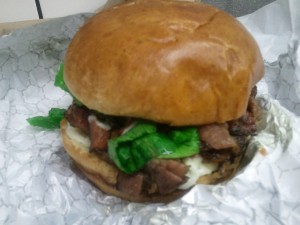 About five minutes later my order was ready, once unwrapped I was feeling quite happy, it certainly looked pretty enticing. Once I bit in to it, it was like “Oh my good lord”. It was ridiculously tasty, every mouthful worked. First there was the soft moist egg bun, then the cheese, mustard, and mayo was all melted in with the mozzarella to create a mild mustardy cheesy sauce that oozed into the bun and onto the burger. The romain lettuce was fresh and thinly sliced, lying just above a topping of thinly cut pastrami on top of a double cheese covered stack of burgers. The whole thing went down in about five bites and my waistline did not even groan in protest, in fact I think my stomach might have shrunk slightly in the hope that I would feed it with another one of these burgers.

I don’t want to big this place up too much, but it was a total surprise and a very pleasant one. As I munched and looked around at the other happy diners, I could tell that they knew that what they had found here was a little gem in the loop and maybe I should not tell anyone. Too late.

Max’s Take Out is located at 20 E Adams Street, in sight of the overhead line of the Loop El. They are on facebook and have a website at http://www.maxschicago.com/