It really helps if the train stops at the El Station you are planning to visit. I was heading up to Morse on the Red Line and it would have also really helped if they had announced it was not stopping there before I got on the train, not waiting until just before the stop leaving me the following options: Get off one stop early at Loyola and walk up, Get up one stop after and walk back, but no it was not even that simple, on the way back it was not even stopping at any of those three so I was going to be stuck at least 3 stops away from the nearest station that would let me on. 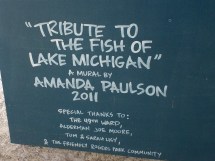 Good job the sun was shining. I got off at Loyola and followed the tracks North, the bonus being that you get to see unplanned things, in ths case a whole load of murals in the CTA overpasses. The best of these was beneath the bridge at Platt and Glenwood where there was a whole selection of fish painted by Amanda Paulson, really a nice moment and something  would have never seen if there was no weekend maintenance. Somedays I just love the surprises that inconvenience can bring.

As I got closer to Morse the walls of the CTA banks were also painted, what is this place? and what sort of food am I going to fiind? As it happens once I reached the closed station, across the road my eyes were drawn to the Grill Inn, I was thinking of chicken by now, so lets be hopeful.

I had never seen this many fries options on the menu board, you could get cheese, cheddar, cajun, garlic, buffalo, chili fries (or just fresh cut) or really push the boat and get the BlazzInn fries which were topped with ranch and buffalo sauce, and to top that you could even add cheese or cheddar to that choice as well. For the record I didn’t get any fries. 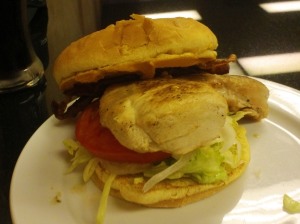 I did not dare attempt the Morse Burger, well not with the anticipation of the sun beating down on my head as I walked back in 30mins times, and also as it was a beast  a 1-pound triple burger topped with cheddar, bacon, and  grilled onions. There were smaller 1/3 pound options that all sounded good, and the menu declared that they were made  from fresh, never frozen, juicy beef, seasoned to perfection. The last three words a bold statement indeed, I shall have to return to find out. Instead I just had a ‘Cheddar n Bacon’ Chicken sandwich with lettuce, tomato, and onion. It was a big thick piece of chicken, an entire 8oz breast grilled lightly and simply. It was at least an inch thick but well cooked so that it was still moist and juicy. Only thing was, that it could have done a bit more seasoning even just a hint of salt and pepper. It all felt quite healthy though, there was so much chicken that even the bacon and cheese were mere bystanders sitting quietly on the upper bun unable to join in the flavour conversations in my mouth.

Inside the Grill Inn it was a nice friendly space,  the fact that they served beer, and they were very welcoming, on the wall was a great picture, which when I enquired learnt that thay had commisioned it, not just bought from some art shop. It would not fit under my shirt so I just had to settle for taking a photograph instead.

I liked it here, not just the options, but the beer choices, and the local area is full of art making it a nice spot to pass by on a sunny day. When the station is open I may well drop off again, and have a big burger, followed by a bigger walk home to walk it off. 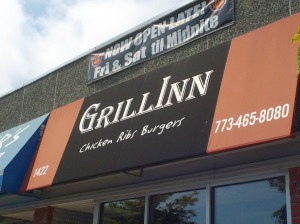 located at 1422 W. Morse Ave about 150yds from the Morse Red Line CTA station, (and a lot further by foot from the other stations )website: http://grillinnchicago.com/