Today at the Farmer’s market in Loughborough I chanced upon the Woodhouse Farm stall where a young chap was selling a whole load of meats from the farm, sausages, bacon, hams, steaks, black pudding and much more. In amongst that were a few ‘misshapen’ scotch eggs. As I picked one up, in between offering us four packs of sausages for 10 quid, he casually informed me that the Scotch Egg was a pig yesterday, well just the sausage part that is unless pigs come from eggs in Leicestershire. He had made all the sausages and the scotch eggs himself and it was hard not to buy into the whole farm to shop deal.

In addition to a Scotch Egg, I did take advantage of the four packs of sausages offer getting in no particular order – some Pork chipolatas, some Toulouse, a pack of Rare breed Tamworth pork, and last but not least a pack of Pork, Stilton and Leek.

So what else was I having for my Tea tonight? Well it had to be that Scotch Egg. From Farm to my Stomach in 2 days, can’t get much better than that. 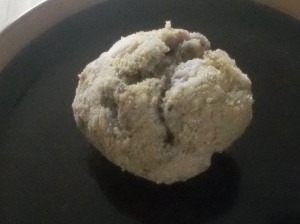 It was a really good thick solid sausage meat. I think that this was the best scotch egg I have had on my trip to the UK. The flavour of the meat was really herby and had a great texture, I just wish I had bought more than one of them.