It’s hard not to get excited about a trip to one of Jamie Oliver’s resturants, over the years he has been almost constantly in the spotlight and gets as much good press and he gets bad press. He has probably featured equally on the what’s hot and what’s not lists. I think to me his greatest legacy is getting the average bloke off the sofa and into the kitchen. It always used to be that the BBQ was the Man’s cooking arena, but these days you are likely to hear a bloke down the pub inviting his mates over for some food with the line “Come over for some food, I’m going do a Jamie”.

When I “do a Jamie” it is usually one of his ‘everday curries’ or more recently his ‘carbonara’. Having said that, my carbonara is so far removed from his I have taken some serious liberities with the recipe.

When I heard that we were going to Jamie’s Italian resturant in Nottingham for a family celebration, I have to confess quite sadly and probably not really in the spirit of the moment that it was a chance to compare his carbonara with mine, and the one in his book that I was copying. Perhaps I should have been more focused on the celebration part.

For a starter or ‘antipasti’ if we are playing properly I was in a quandry, I love mushrooms for starters probably due to years of conditioning at Berni’s steakhouses or similar where breaded mushrooms with garlic mayonaise was the seemingly exotic choice as I grew up. This day at Jamie’s there were two choices; “Mushroom Fritti” described as ‘My mate Mike’s crispy mushroom & garlicky mayo’ and “Baked Chestnut Mushrooms with smoked mozzarella, thyme, and crispy bread”. On the table three of us went for the baked mushrooms, and two for the Fritti, I guess we were all brainwashed at Berni’s.

I had the Baked Chestnut mushrooms, but having tasted the Fritti wished that I had that instead. The baked mushrooms were good, just not quite what I expected. I had imagined a stuffed portabello mushroom with some crusty bread. In reality it was thinly sliced mushroom, layered within melted mozzeralla on top of crispy flatbread casing. Quite tasty nonetheless and very well executed. The flatbread was apparently soaked so that it could be molded to the pot and then it crisped up as it was baked, like pastry.

My main course was predetermined by my oh so sad blogging instincts and I was always going to have to try the “Mini Meatball carbonara” – ‘served Roman style with lemon cream sauce, Parmesan, and rigatoni pasta’. I had recieved reports that his meatballs were smaller than mine and that his sauce was more creamy and less lemony. I was beginning to suspect that this was because it was a different recipe. 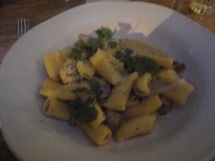 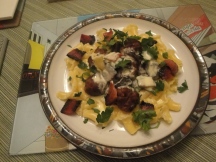 Terrible Photo’s I know, but what we have here in sequence from left to right is Jamie’s Carbonara from his book Jamie’s Italy, Jamie’s Italian Mini-Meatball Carbonara, and lastly my version of his recipe from the book. Thinking about it his recipe really is a Roman version using freshly made pasta and good quality pancetta. It was quite peppery and had only a slight hint of lemon. This contrasts with my efforts, but probably because I added lemon juice instead of lemon zest. I realised that my experience with Italian food is not as authentic as one might imagine, apparantly having spaghetti bolagnase every Friday night doesn’t quite count if you want to get a good well rounded experience. I have probably conditioned myself to liking my pasta slightly overcooked and my sauces very juicy. I found that the pasta as Jamie’s was a bit hard and chewy to my taste but then again one of the criteria for judging good pasta is in its consistency apparantly you can always tell good pasta by how much chewing it requires. The more you need to chew, the better the pasta. I chewed mine quite a lot at Jamie’s.

In the end it was a good meal at Jamie’s but I came away wishing that I had forgotten all about my obession with his carbonara. Having tasted everyone elses food I should have chosen differently, apart from the Mushroom Fritti, there was a rather excellent take on a Milanese, “Jamie’s Favourite Turkey Milanese” – thinly breaded crispy turkey breast decribed as ‘stuffed with prosciutto & fontina, with a fried free-range egg & truffles’. I had a taste of that and it was lovely. Next time I will have that instead!