Walking along West Montrose towards the Wilson Red Line from the Montrose Brown Line stop in the sunshine I saw a familiar face up on the wall and it created a brief flashback to the previous weekend. King Kong had clearly headed back over to New York from Chicago, perhaps he thought that everyone had forgotten about that small incident with the Empire State Building. 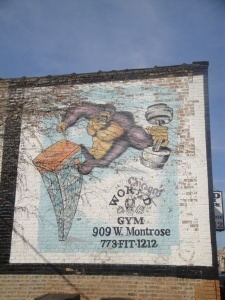 Last weekend in Union Square New York I had bumped into the Gorilla Cheese Food Truck, this was my second encounter I had met the truck some months previously over near the East Village. 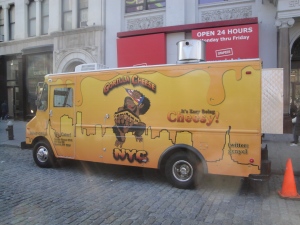 On this occasion I decided to go for one of the daily specials. Todays option as it happened was cheddar cheese with bacon and tomato, it came with tater tots and a drink for $9. It was not bad, the toast almost a little close to being burnt but lets call it lightly charred in the interest of food truck slight bias. The filling was nothing too exciting and the tater tots were just plain old tater tots. Despite all that it was very pleasant sitting in the sunshine in Union Square eating this food truck offering.

The Gorilla Food Truck can be found on the streets of Manhattan and their locations are posted on their website http://gorillacheesenyc.com/ you can also follow them on twitter and facebook. Not the greatest grilled cheese in the world but good enough to fill a small hole if you chance upon them.