I chanced upon the Seoul Food Wagon in Union Square on a small trip last weekend to New York City. It was such a good looking truck I felt I had to give them a chance and sample their fare.

On occasion I really despair,  I stood in the queue, or line if you like, listening to someone explain that ‘Seoul’ Food was like “soul” food because it was a play on words, as it was from the country with a city called Seoul NOT spelt incorrectly. Blank looks all around, Seriously America you sometimes really embarrass yourselves with your ignorance. It hosted the Olympics in 1988 and I suppose not worth mentioning the World cup in 2002 as that involves association football or soccer as you call it. I forget that you only admit to competing in sports that no-one else competes and insist on calling the world championships such as baseball, american football, and ice hockey..but no-one else can play.

Anyhow I found the Seoul Wagon in Union Square and as you can guess it might not have been the best experience. First off I stood in line for about 15 minutes until I gave up as the line was not moving and the guy trying to take orders was well lets be polite, he wasn’t succeeding. I mean guys do you want to make money? FFS.  That day you were hopeless. But OK I walked off and about an hour later I walked back, it was not much better zombie boy was still there but he managed to put a couple of sentences together and take my order. Only just though.

Sweet and Spicy Pork on a brioche bun 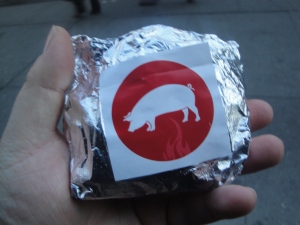 I think that I liked the spicy pork better it had a nice kick. Both were pretty decent though and in the end although I moaned a little about the whole experience I did quite enjoy them.

I guess my only other gripe is that they charged tax on top. I haven’t yet met another food truck that does that.

The truck is on facebook and twitter and if you signed up or favorited them you could get a free taco, so pretty good deal if you are nearby.