Oh my Gawd, I was just hitting food truck after food truck. I had headed down on the red line just to hit up Union Square to see if the traders at the regular farmers food market were still there. On my way from the station walking along 14th St I bumped into Phils Steaks. With a total lack of self control I swayed across the road through oncoming traffic like a game of frogger only the lily pad was a food truck and my name was all over it. No lives lost, high score on the way. 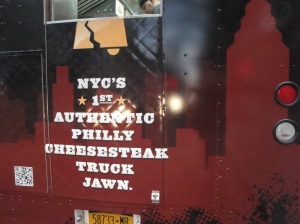 Once there I was well happy to discover that it was a Philly Steak Truck, I guess the name could have given it away. Chatting to the guy behind the counter I just assumed Phil owned the truck. It was only later that my brain kicked into gear and made the leap. There was some discussion of the cheesesteak situation in Philidelphia and the total lack of cheesesteak situation in my current home of Chicago. I was also chuffed to hear that I was probably their first Brit to sample their fine fare.

Apparantly only open for a couple of weeks, the guys seemed to have been doing well, and to be honest having sampled one of their cheesesteaks it is pretty easy to see why. The bread is authentic, soft and hard at the same time, solid enough to support a big pile of meat but soft enough to absorb a good bit of gravy and cheese wiz. The meat was chopped up, a little different from Geno’s and Pats in Philly where it is more sliced. Nonetheless it totally worked. Meat, Cheese Wiz, Onions, Bread – perfected combination and totally recommended. 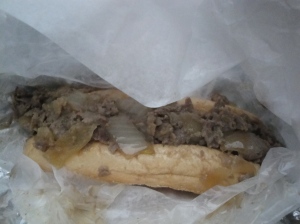 I recommend hunting them down using twitter at http://philssteaks.com/ it is worth the effort