Sunday breakfast sometimes ends up being brunch and on occasions like this weekend gets dangerously close to dinner. Wandering along Lincoln Avenue debating whether it was too late to jump on the el to find a new stop and a new eatery I passed by the Golden Angel Resturant and Pancake House for about the 100th time since I moved into the neighbourhood and figured “Hey there old lady diner why should you miss out on all the blogtastic fun? Today you are mine and also I really cannot be arsed to go any further I am jolly peckish, so please feed me!” 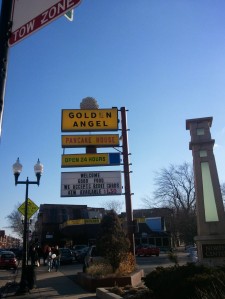 Inside it was just as I hoped, it was old school by which I mean it seemed to be stuck in the 70’s in a good way, proper waitresses in diner gear probably been there since the mid 70’s too. I am being kind and nostalgic there as opposed to rude, my waitress was hovering around with her coffee pot looking to top me up at any chance. It was just as I imagined from all those movies of America I saw as a kid.

There were plenty of specials on offer, but really I just needed something breakfast like so I went for a “Greek breakfast” which was listed as hashbrowns, onions, tomatoes, sausage, 3 eggs and feta cheese, accompanied with buttered toast and jam (well jelly but that sounds so wrong). In reality when it came it was a big old scrambled up pile in a skillet.

Despite its unkempt appearance it was very tasty, crunchy potato, plenty of sausage, a nice herby taste and a good salty taste from the feta. I would probably avoid reading many reviews about this place as I would imagine that they are not complimentary, my view is disregard and take this place on face value and you will probably be not too disapointed.