For an expat Englishman there is a constant search for good fish and chips, not just abroad but in the UK also.  Some surveys will claim that Curry is the number one takeaway in the UK these days, but ignore that it is Fish and Chips, and that is what we seek and crave when overseas. But beyond that it is the traditional fish and chip shop that is also a dream that is usually unfulfilled, BUT on Greenwich Avenue in the West Village New York there really is a  genuine real fish and chip shop, it is not just a themed effort it actually is better than many in England.

I had haddock and chips, mushy peas and a bottle of irn bru ( ‘Made in Scotland from girders’). The fish was great flaky and moist, the batter crisp,  the chips were solid, pretty tasty and mixed with the mushy peas were a tasty delight. They were offering deep fried brussel sprouts when I went in, but I declined, that was a step too far 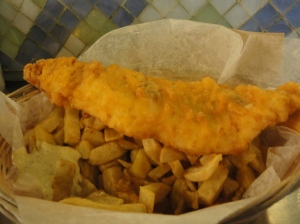 A Salt and Battery has featured on the Food Network most notably in Bobby Flays Throwdown, there was no way that he would win this one and I thoroughly enjoyed watching his defeat as I knew that he could not beat these fish and chips. http://www.foodnetwork.com/throwdown-with-bobby-flay/fish-and-chips/index.html

I love that they play UK Radio as well in this place and that it just has the feel of being back home in England. There is not much room to sit inside just about 6-7 seats, but on a nice day you can eat your takeaway on the bench outside or in the park across the road (if the hobos and the pigeons will give you a bench to sit on)

A Salt and Battery is located at 112 Greenwich Avenue (bewteen 12th and 13th Streets). You can get here by subway taking the A or C to 14th Street and walk  5 mins