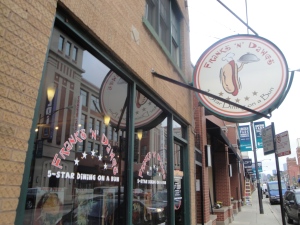 This is my fourth visit to Frank and Dawgs and I love the place, it is a good job it is not on my block or I would be eating there until I was sick of the place or until I was a candidate for the Biggest Loser (well a serious candidate anyway, just to fend off any valid comments guys).

The trick to this place is that on first inspection you think it is a hot dog emporium but really it is even way beyond a gourmet sausage place, I think it has its own catagory as of yet undefined, so lets just call it the ‘dogs bollocks’.

If you are unfamiliar with the term I will let you google it and no its not a comparison with the Dogs Bollocks pub in Milwaukee (which I found by googling – It has a Tardis! google that too).

In fact you could probably eventually find Dogs Bollocks on F&D’s menu as they have pigs cheeks in their Lyonnaise fries – Hand cut fries, braised pig cheek, arugula, poached egg & a dijon mustard vinaigrette. But I digress (once again).

A couple of great features even before you get your hands on one of Chef Joe’s sausages is at the order window. You can view the menu on the board but also on an ipad so you can see the pictures of what you are going to eat online.

Funnily enough when you go to a resturant and you get a menu with pictures it can be a bad thing, but here its just a nice touch. The second ace feature is that instead of giving your name when you order and having it called out when your dawg is cooked, you get to select a ‘famous’ person from the wall of “people I don’t know because they are only well known in America or even Chicago” as an Englishman I have no clue who half of them are – for the record I picked Hugh Grant in his infamous jail mugshot after his encounter with that hooker. 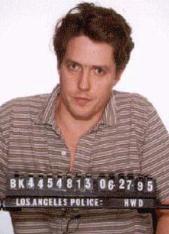 Cheese Fries – listed on the menu as ‘Fresh hand cut Idaho potatoes twice fried topped with mild shredded Cheddar and Monterey Jack cheeses’ in reality what you get is a bowl of tasty fries covered with melted ‘real’ cheese not one of those cheesy sauces, the cheese is melted then allowed to solidify sticking the fries together and to the grease proof paper, so you get to pull gooey lumps of cheese and fries off the paper – actually forget the dawg just get a load of these fries 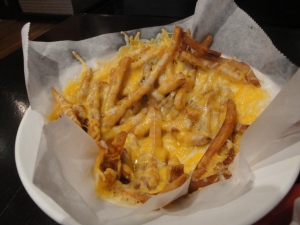 The menu overdescribes this what more do you need to say, ‘its a great pork sausage with bacon and a fried egg’  that is enough even for a pretend foodie in actuality “brunch dawg” says it all.

I love the bacon, which is thickly cut chunks almost pancetta like, the mayo is a nice touch, and the egg yolk is runny enough to dribble down your chin which is perfection in itself. I mean for gawds sake just look at it without salivating if at all possible. 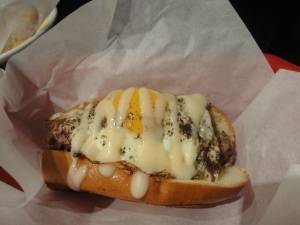 One of the best things I like about all the dawgs here is the often overlooked bun. I hate it when my dog is encased in a bun that falls apart, but here at Frank n Dawgs that component of the dish is of equal standing in making the sausages here outstanding.

The website describes the bun as  ‘a new england style lobster roll; baked daily by a local artisan baker, lightly buttered and toasted to perfection.’  I would describe it as a toasty slightly greasy solid dawg container in a good way.

To get here you have a couple of choices both involving a 10-15min walk, either take the Brown line to Armitage and walk South, or take the Red Line to North and Clybourn and walk North East along North Clybourn Avenue. If you have a car you can take that, but trust me you need at least a 10 min walk to get rid of any of those calories! so leave it at home!