M Burger in Chicago is a simple yet effective local burger chain with Five joints scattered around the city. The first one opened only 5 years ago in 2010 and over the few years that I lived in Chicago I think I have eaten in them all. It was only recently though now on one of my trips back since I moved away that I thought to put pen to paper or rather fingers to keyboard to add it to the blog.

If you want a little taste of the history of how it came to be, there is a pretty interesting article on BurgerBusiness.com called ‘The Tru story of M Burger’ that tells the story. It is well worth a read.

If you walk in to M Burger without ‘the knowledge’ then you will find yourself choosing from their basic Menu perhaps a Cheeseburger or an Old Fashioned, but if you have inside information you may be about to order from their ‘not so’ secret menu. What is on that menu? I hear you ask. If you head to their website you can click on the burger to find out, but just to whet your appetite I may throw down a few. 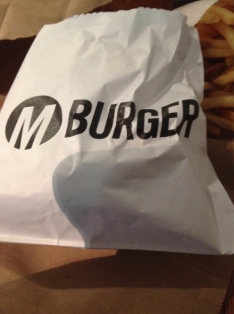 The “Barnyard Burger” looks to be the one for me ‘Lettuce, Pickles, Onions, Sauce, Burger Patty, Chicken Breast, Bacon and American Cheese’. Another choice might be the “Chicken Mikey” which is described as ‘The Most Secret Secret Menu Item – Chicken Breast with lettuce, pickle, onion, ketchup and mayo’

But if I was to go totally out of the bun so to speak I might order “Roman Style” which is any burger with two grilled cheese sandwiches instead of burger buns as your top and bottom. Sounds like one to order secretly and to be eaten in the corner on your own

I found a pretty good run down on the secret menu with some good pictures of the sandwiches on Thrillist well worth checking out! 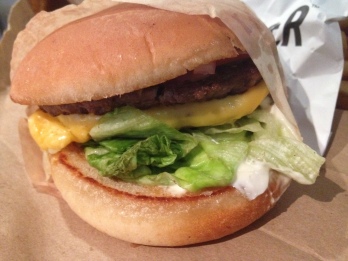 The Old Fashioned Burger at M Burger, is well, as described a nod back to the classic ‘old fashioned’ toppings of ketchup, mayo, lettuce, pickle, tomato and onion and American cheese. I know that you can choose from that secret menu, but in all honesty this is one of my favourites from the menu. I even like the pickle on this burger!

The first one I ever ate at was the one in River North where I just had a cheeseburger, after that I tried the one just off the Magnificent Mile opposite the Allerton Hotel and it was the last one I ate at too just a week or so back as I was staying at that Hotel.

I wonder what impact Shake Shack will have on the joints as it has opened in relatively close proximity right in the midst of the M Burger empire. It is also ironic as it was Shake Shack that provided that first spark and thought that led to M Burger being born at the back of Tru. Interesting.

Anyhow to summarize they serve pretty good burgers at a good price and well worth a visit.