Genes Sausage Shop is in the heart of Lincoln Square in easy walking distance of the Western El Stop on the Brown Line. When I first considered moving out of the burbs into the city I was told that Lincoln Square was a pretty good area to look for an apartment, so just after the snowpocalypse of 2011 I found myself riding up the brown line to the Western Stop to check the street out. It was a damn cold day and the snow drifts were blocking the crossings but as I walked through the square I saw for the first but not last time the cow above Genes Sausage Shop. I was in through the door and realised that this place had all my deli meat needs. It was probably that one moment of finding this place that brought me to live nearby for two years.

Over at the deli counter, once you have maneuvered your way through the crowd to get a ticket, your eyes and senses are assaulted with a plethora of meats, cheeses, and assorted deli items. You need every ounce of resistance not to empty your wallet out onto the counter before opening your mouth like an expectant chick in the nest awaiting to be fed with morsels of sustenance. It does not help that most days there is a small selection of plates filled with little slices of sausage and meats to sample. Some days there are 4 or more choices and it is almost like deli tapas as you wait eagerly to be served.

One of the best things about buying your deli meat at Genes is that you can see it all hanging behind the counter, links of smoked sauasages abound and there are huge slabs of cooked pork and the suchlike just sitting there waiting. Before I became accustomed to the joys of American slab bacon I used to buy Canadian Ham or bacon from the deli as a substitute for my missing English or Irish back bacon. After a while I learnt to love the US style and so turned my Gene’s attention onto their smoked sausages instead, but if I wanted the Candian style stuff well this was still the best place to come to.

They claim to sell over 40 varieties of sausage here at Genes and according to their website ‘three in-house European smokehouses burn a medley of natural woods to achieve color and flavor perfection for every variety.’ One of my favourites is the Alpine sausage which they often sell in cooked links with onions on the hot section of the deli. This variety is described as a ‘twist on a Polish kielbasa with a double dose of garlic and smoke time’. 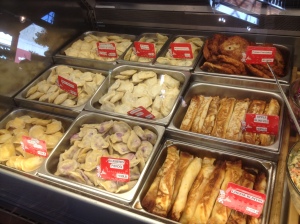 The deli counter at Genes and the coolers over in the produce section are filled with some of the best Pierogi I have found in the city. It is a quite dangerous situation, really you know that maybe 4 or 5 pieces are more than enough for one person, but somehow I always seemed to walk out with a couple of tubs that would last me a week (or rather should last me a week)

I am not really a great one for buying lots of Salads, but I was often tempted by the bowls of pasta, rice, and potato salads that they sell at Genes. They are really fresh and I am sure that they are replaced pretty often mainly because they sell so fast that there is little time for them to sit there on the counter.

Apart from the great deli counter there are two other floors at Genes. The second floor houses a lot of speciality regional items and also a pretty decent selection of wines and international beers. If you take the elevator up to the roof during the warmer months you will find the rooftop garden café that is in a really nice open space. It only stays open when the weather is good so if it is raining don’t bother trying. They suggest that you should “Come together with your friends and family at our communal wooden tables or the skylight bar to enjoy the European atmosphere, cuisine, beers, and wines.” They have a good menu, highlights (for me) include the “Bratwurst Plate” which is a ‘Choice of two sides and choice of bratwurst: Gene’s homemade, traditional German, Chicago style, Sheboygan, mushroom Swiss, jalepeño, and apple’ and the “Pierogi ‘à la Carte'” a selection or choice of Pierogi stuffed with ‘Wild mushroom and sauerkraut, sweet cabbage, potato, sweet cheese, blueberry, and plum‘. They also have good sandwiches too filled with hams, cheeses and salads.

Yes looking back on that day I walked here in the snow I am kind of happy that I ventured out into the cold as since then this place has certainly warmed my heart and soul with good food.

This particular incarnation of Gene’s Sausage Shop is located at 4750 N. Lincoln Ave, walk up Lincoln Avenue North from the El Line and look out for the big cow attached to the front. There is another location at 5330 W. Belmont Ave, but I have not been to that one yet. You can follow Gene’s on Facebook and on Twitter.