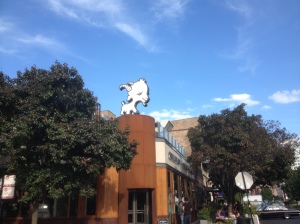 I have been looking forward to visiting the Little Goat Diner on West Randolph St with eager anticipation for quite some time now. I have been to Stephanie Izard’s Flagship restaurant the Girl in the Goat  a few times and I really love that place but it is so hard to get a table. There are no reservations at the Diner, so all I was hoping to need to get a table was a little patience. We headed over to the RandoIph Street Restaurant area riding the elevated railway up to the Morgan stop and taking the short 5 minute walk south. The Diner was pretty easy to spot as I walked down Randolph Street as there is a big white revolving goat on the top of the building. I kind of wanted to stop and watch it spin around for a while but I knew that inside there was going to be a whole lot of tasty food just waiting for us.

It was pretty busy inside and much bigger than I was expecting, with commnunal tables, booths, and counter top service, I would guess it could seat close to 100 people. As expected once inside it was a case of first come first served as there is no reservations, but we didn’t have to wait more than 15 minutes. One nice touch is that if you have a cell phone they will send you a text message when your table is ready so you don’t have to hang around. The good thing was that we got a bit of time to sit and peruse the menu to see what the Little Goat had to offer us for lunch.

At first I had planned to have some sort of breakfast type item maybe some eggs and bacon, or perhaps maybe a corned beef hash? Then on the walk over I starting thinking that maybe I should have something goat related, a burger perhaps. Then as I started to cast my eyes down the menu, it all changed as I saw the two words ‘Grilled Cheese’. Ever since I heard that Grahamwich had shuttered and his dream of a grilled cheese sandwich was removed from the memories of my mouth I had wondered where my next go-to grilled cheese was going to come from. Could this be the one? Would Steph and her Little Goat team come to the rescue with a new grilled cheese to hang my hopes and sandwich dreams upon?

The sandwich was fantastic, it was nothing that I wanted and yet everything that I wanted at the same time. I still had a memory map of Graham’s sandwich etched in my mind and it needed something special to dissolve the synaptic threads holding that memory in place. This was a very different Grilled Cheese sandwich beast indeed. Filled with smoked gouda and smoked tomato, well would you be surprised to hear that it has a smokey backnote?  Then you add in the sweet almost tangy and creamy Montamore cheese and you were getting a good combination of creaminess and smokiness. I needed to know more about this cheese so I googled it and on the Sartori website I found the following description “Like a new romance, this sweet, creamy and fruity cheese begins with a deliciously inviting appearance and finishes with a playful, tangy bite”. Yes that it what I was getting from the bite into my sandwich. The sandwich wasn’t finished yet with its assault upon my tastebuds, they had also thrown in some pork guanciale (typically an unsmoked Italian bacon prepared with pig’s jowl) which was less prominent flavor wise than I had expected. It was better than having salty pancetta, it did add a little light saltiness but not too much perhaps there was just a hint of pepperiness. I am imagining that you probably have figured out that I quite liked this sandwich, and the best part? it was only $10.

My companion had the Pork Belly Pancake for $12, this was a scallion pancake topped with grilled pork belly with hoisin sauce all  covered with a  shredded bok choy salad and a ginger maple dressing. I didn’t get to taste any of this and the verdict I was given was “absolutely delicious” 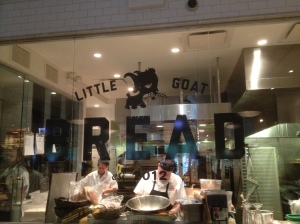 After we had finished our lunch and I was still salivating from my sandwich we wandered next door into the attached Little Goat Bread. Initially we had just intended to get a roll or bit of bread to make a sandwich with later. I was pretty surprised to find a bar and a whole load more sandwiches and soups that we could buy to take home. Luckily we were pretty full or we would have been buying even more food. 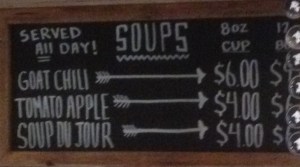 As it was I finally did get my hands on something goat related, buying a cup of Goat Chili for my supper. This was also very good, and to be fair I didn’t expect anything less. It was surprisingly a little sweet, but that was a nice surprise, it made it a little bit different. There was a bit of spice not too much of a hit and there were some crunchy chickpeas in there. If anything it had a morroccan air about it. If I was passing by this way as the weather gets colder this would be a perfect hit to blow those chills away.

I really liked the Little Goat Diner, it was just what I hoped for, and the Little Goat Bread next door was an added bonus. It was hard not to spend the entire post talking about that grilled cheese sandwich, and I will just have to see if I have the will power to try something else if I visit again. Odds are thought that will be an epic fail in originality of menu choice and I will succumb to another Grilled Cheese.

The nearest El Stop is on the Pink Line at Morgan.