If you are trapped in the Westfield Hawthorn Mall at Vernon Hills and need some salvation from the depressing nature and offerings of the Food Court, you could do no worse that taking a trip along the mall to the French Gourmet Patisserie run by the nuns of the Saint Roger Abbey. 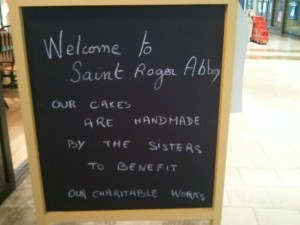 All of the cakes, sandwiches and cookies are made daily by the Sisters’s of the Abbey, and they run the shop during the day at the mall.

Apart from making sandwiches, soups, pasties and ice cream, they have a most excellent Cake and Bun selection. Ranging from the rather fancy patisserie items, to those items that you just really fancy like a chocolate eclair or a cream puff.

I could not resist sampling one of their Chocolate Cream Puffs, and it was a most decadent little treat. There was also the added benefit of total absolution of guilt as I was served it by a nun and all in a good cause. It must have been guilt-free (if not calorie free) as the sister appeared a little disapointed when she could not persuade me to partake of a second cake.

The Saint Roger Abbey patisserie is on the upper level of the Mall at the Sear’s end and is store #628.

In their own words: “Genuine French recipes; delicious sweetened dough pastries; breads and baguettes made the traditional way”

“Delicate cakes handmade traditionally and finely decorated the French way. Each cake has been neatly made by our religious nuns with prayer and love, for a light pastry in keeping with tradition”

For more detail of the shop and the abbey view their website at; http://www.strogerabbey.org/