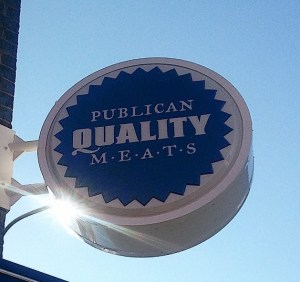 Publican Quality Meats is in the Fulton Market district of Chicago and is easily accessible from the Pink Line via Morgan or Clinton El stop stations. It is part of Paul Kahan’s notable empire, and is right across the road from The Publican Resturant. Not only is it a purveyor of quality meats and associated meat related deli products, but it also houses a small cafe area selling freshly made sandwiches. The seating inside is limited and communal in nature. We ended up sharing a table with two guys from Indiana who stop in about once a month. You really have to be a dedicated soul if you make that much effort to come here as this place is not in the middle of the lunchtime footfall traffic. I thought that we had done well taking three different trains to get here. Even so it was packed out, so a lot of people are going out of their way to come here. We arrived at about ten to twelve and we got the last two seats, but people were coming and going all the time and I didn’t see too many people having to wait for long.

‘But what about the food?” I hear you wonder

Checking out the sandwich menu I was almost tempted to get the PB&L as this was listed in Chicago Magazines top 50 sandwiches edition. On the menu it is listed as lamb and pork belly sausage, feta, cilantro and piperade on a franks n’ dawgs lobster roll for $10. Chicago magazine had a great line describing it thus; “It’s like the quarteback on a team packed with future Hall-of- Famers.” I kind of like that analogy. The only thing that stopped me getting this sandwich is that I thought that it was basically a hot dog, and a Frank ‘n’ Dawgs style dog at that, and I was in Frank ‘n’ Dawgs already once this week so needed something slightly different.

I had a look around the table to see what the other people had ordered and one of the guys next to us had got the BLT sandwich. He seemed very pleased with himself, telling me that it was the best bacon that he had eaten, and told us that it was $3 a slice over the road at Publican. It looked so good that I was sold on getting one for myself.

The sandwich is made from some really solid PQM bacon, it is not crispy or crunchy, but it is a really solid bite. Somewhere between caramalised and a jerky texture. It also has some thickly cut slices of tomato, some fresh crunchy lettuce and a light lemony aioli. The bread was a thinly sliced sourdough, which was a little hard and crunchy, but for once this worked really well with this sandwich. At $9 pretty good value as by all accounts there was at least $5 worth of PQM bacon in it. Apart from the bacon, the other star turn was the lemon aioli, it was not too strong and just gave a light hint of creamy lemon to every other mouthful. I thoroughly enjoyed it.

The other sandwich that we got was the Pork Belly Sandwich, so good and popular that it sold out during the time we were there. I would say that almost every other sandwich that passed by us on the way to other tables was one of the Pork Belly 0nes. This sandwich was comprised of braised pork belly, romesco verde, watercress, apple, mint and yogurt on a ciabatta, all for just $10. The star of this morsel was the braised pork belly, which was thick, very well seasoned and  full of flavour. There was a lovely bit of luscious pork fat that was crisped to perfection. The apple, mint, and yoghurt gave an almost tzatziki like taste. The romesco verde gave the sandwich a nice spicy kick. Last but by no means least was the bread. When it said it was a ciabatta I was worried that it might be a bit hard, but it wasn’t at all, it was a lovely piece of bread and the perfect vessel to present the pork belly and all it’s tasty friends.

I could carry on and tell you in great detail about the displays of great meats and charcuterie, but I feel I need to leave you hanging just a little bit. if you are not near enough to make your own journey here to see for yourself, you can get a good idea if you check it all out on their website; http://publicanqualitymeats.com

Everyone was very friendly both customers and staff alike, the service was excellent, our waitress well informed about the product, and appeared proud and delighted to be working there.