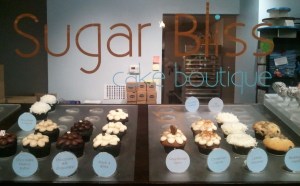 I like the odd cupcake on occasion, but sometimes it is hard to decide which one to get, and I often wish that I could manage to eat more than one so that I could try a few different flavours. Luckily for me while alighting from the Elevated Rail tracks at Madison and Wabash I stumbled upon The Sugar Bliss Cake Boutique where mini-cupcakes are a speciality. They do big ones too, but lets just use editorial discretion to gloss over that for the purposes of this tale. 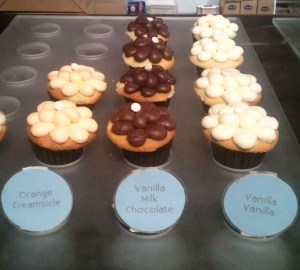 There is a different selection on each day, and you can get a list off their website, but I did note that there were a number of other flavours available in the trays that were not listed. So I expect you can just ride your luck and see what they have.

We got a box of 6 at $1.50, but as it was towards the end of the day, they slipped in another two just to fill the box up. Which was a good idea to stop them rattling about in there, as they had to survive the El Train home without getting jostled, squashed, or eaten. 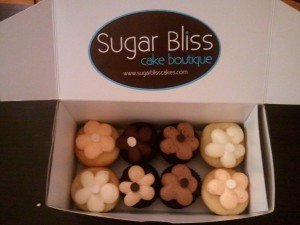 So what I ‘think’ we got was two ‘Orange Creamsickles’, two ‘Vanilla Vanilla’, two ‘Chocolate Hazelnet’, one ‘Chocolate Peanut Butter’, and one ‘Chocolate Milk Chocolate’. Rows 1 and 4 above were the Orange, and Vanilla cakes, Row 2 is the Chocolate Milk (top) and Peanut butter (bottom), Row 3 was the Hazelnut (Gosh that was a bit complicated I feel that I needed to provide some sort of map and key to diagram that all out).

From personal experience or from well qualified hearsay I can confim that they are all very tasty bites.

The others that I sampled were the ‘Chocolate Milk Chocolate’ which was a mix of milk and dark chocolate, more specifically described as ‘Dark chocolate cake with milk chocolate buttercream‘

Lets face it, it’s cake, so if you like cake you are going to like all of these. 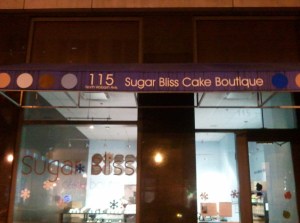 Sugar Bliss has two locations, one in the Loop at 115 North Wabash, and one in River North at 509 North Orleans. You can get all of their details online at http://www.sugarblisscakes.com/ where you can also order online.

The Loop location is right beneath the Elevated line on the other side of the road from the Marshall Fields building. So its in between the  ‘Madison and Wabash’, and ‘Randolph and Wabash’ stops on the Pink, Green, Orange and Brown lines, you could also ride down or up on the Red line and exit at ‘Lake’ at walk across, or the Blue at ‘Washington’.