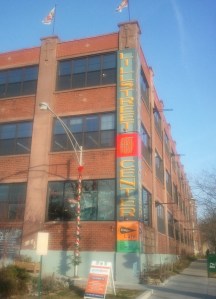 I am a big fan of ‘First Slice’, which is a self-funded charity to feed the needy and homeless and have often frequented their cafe just next to the Brown Line up at the Francisco stop in North Manor although thinking about it that seems a bit daft as I have another one of their cafes right around the corner  in the LillStreet Art Centre in Ravenswood  http://www.lillstreet.com/. This is literally 5 minutes walk away from my house and yet I have not been in there. Shocking really. Not only is it a great cause but the food is great too. So this lunchtime I headed over there for a bite to eat.

Looking up at the Menu board my eyes were drawn to the ‘Duck Confit and Mozzarella’ sandwich, and not just because it was hand written in chalk and stood out from the other menu listings. No it was something else that triggered my interest, a somewhat subliminal message from my brain? what was it? I did not really know why but somehow I just knew I had to have that sandwich.

I am on a roll, this was another really excellent sandwich. The duck confit plenty of it, tender and soft and it was really moreish. I was worried that it might have been a little bit on the rich side but mixed with the other fillings not at all. There was a really great mix of mushroom and onion, both marinated or grilled in something that elevated and took them to the next level. There was a smear of some sort of sweet sauce made with red peppers and also some really nice melted mozzarella cheese toasted onto the panini bread. To add to all that it came with the house salad which I have had before, lots of nice herb leaves and rocket dressed with a tangy vinegratte, and topped with thinly sliced apples and thinly sliced radish. An absolute winner all around.

As I walked back home I remembered where I had seen that sandwich before, it was in the November 2012 edition of Chicago Magazine in their “50 best sandwiches” article. When I got back I flicked back through the pages to see their thoughts, they described it thus “…a wonderland of blistery mozzarella, mushrooms, grilled red onions, and sun-dried tomato spread – overflows with hunks and slivers of duck confit. Ethereal and glorious”. That seems about right to me. Different words but the same thoughts.

First Slice Cafe is located at 4401 N Ravenswood Ave, in sight and a brief walk from the Montrose Brown line station. It is in the LillStreet Art Centre and next to or rather practically within the adjoining shop. You can sit amongst the paint spotted and clay splattered artists sipping their teas and coffees and just relax with some damn good food.

The First Slice website at http://firstslice.org/ tells you all about the organisation, their history, locations, and menu. Well worth a visit.