After learning that their was a new branch of Cheesies in Evanston I had to take the long trek up the red and purple lines to Davis Street in Evanston to see if it was the same and any good. 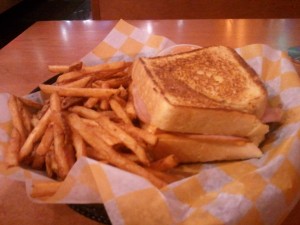 This time I went back to my usual choice, “The Classic”- This is a sandwich of American Merkt’s Cheddar cheese, tomato, ham, and bacon, in texas toast, with a Tomato soup dipping sauce. Halleluah, it was as I remembered from a year ago, really, really good. A perfect combination of simple ham, tomato, and cheese with some nice crunchy, buttery? texas toast. Even the tomato soup dipping sauce was back to form, nice and sweet and creamy, not watery, the sort that you could almost swap your sandwich for a bowl of soup and a crusty roll. But if you had tried to snatch my sandwich away on this day, well you would have been in serious trouble. Not only that the seasoned fries were really on the money too, a little salt and a hint of um maybe paprika, but probably not, and crunchy to bite. Unlike many other places in this price range it was actually worth eating them.

Just like the new Cheesies in Belmont, the Evanston branch also has some great artwork, up here it is locally driven, mostly with a Northwestern influence. The one I liked the most was next to my booth where there is a picture of Alumni charactatures on the wall.I recognised some of them, but one of the guys running the place came over to tell me all about it and who they were. OK so I got Jerry Springer and the girl from 30 Rock and SNL….Tina Fey, ok so who are the others?

I liked the art in the Evanston branch so much more, it was local and meant more, and best of all it still let the sandwich be the star.In summary, back on track, and that is not an el stop project pun!

The Evanston location is at 622 Davis Street, exit the Davis Street purple line CTA El station and walk along Davis St towards the lake and it is there on your right about 10 minutes away.