The Girl and Goat on Randolph Street is one of my favourite destinations, I admit that initially I was drawn due to my Top Chef interests as it is owned and run by Stephanie Izzard winner of season 4, but now I go there as it is a cool unpretenious and comfortable spot to eat some pretty damn good food. The food is served family style, which I have learnt here that means that which ever dish is cooked first comes first. It is not too fussy to make you uncomfortable and has enough twists on the dishes to make you feel as though you are getting something a bit more special than you are going to get at a general resturant or pub type bistro. The service is also excellent they always are able to describe the food and make sure that you get a good combination.

The menu is split into four sections, vegetable, fish, meat, and goat. I find that the best plan is to get something from each section. Instead of sitting there typing in the descriptions on my phone I figured it was easier to take a picture of the menu. So we ordered, in no particular order, the sauteed green beans, the diver scallops, the crisp braised pork shank, and the goat liver mousse. 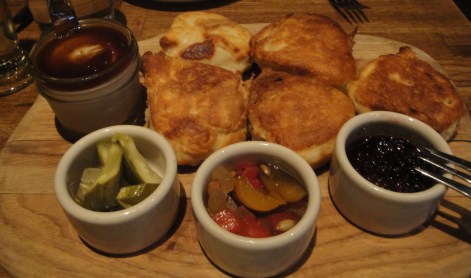 The Goat Liver Mousse platter, came first and it was much larger than I expected, I chose it thinking that I would be getting just a little bit of mousse  and one crumpet to spread it on, in the end we got five large crumpets and a great big pot of goat liver mousse. There were also three more pots to accompany the platter, a pot of pickles, a pot of watermelon salad, and pot of blackberries in a mostada. Our server suggested that we made mini crumpet sandwiches with all of the ingredients and against my better judgement I followed the suggestion. My better judgement was wrong the combinaton was great both flavour wise and with the texture too.

My choice was the diver scallops, these did not look quite as pretty in the bowl, but they did once I had fished one out to the plate. They were really nicely seared so that the top was almost caramelized, they were plump and sweet, really, really good. They came with an interesting combination of things, one of the best items was the crunchy and charred bok choi, which wasn’t mentioned in the menu description but was a star alongside the scallops. There was also some fruit slices, which I am never keen on in principle, but somehow here they always manage to get just right.

I have had the sauteed green beans here before and they are one of my favourite dishes at the goat. With the addition of the fish sauce vinaigrette and the cashews, it is reminscent of chop suey with the beans replacing the noodles, salty and creamy too. 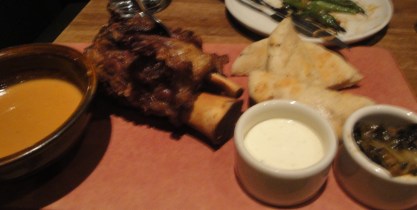 Sadly once the Crisp braised pork shank arrived we were a bit stuffed and full, but we pushed on and consumed the entire platter. The meat was really tasty, the crispy bits on the outside were the best bit (as always) and the pork fell away from the bone in nice big pieces that could be dipped into the accompanying sauces, the butter milk, and a sort of buffalo sauce. It was best to mix a bit of the two together to get a nicely balanced sauce. I made a few small sandwiches with the naan bread but in the end I just devoured down the meat, resisting the temptation at the end to suck on the bone.

I know that some people go on about the hype around the Girl and Goat and that it is overrated, but I ignore the hype and I just love eating here, even if it does take about 3 months to get a reservation. My advice is to logon to opentable every couple of weeks and stack up the bookings, that way you always have one coming up (planning ahead). It is worth the wait and even if you haven’t a booking you can take a chance and turn up, there always seems to be people in the bar area getting some goodies to eat.

Girl and Goat is located at 809 W Randolph St, easily reachable by dropping off the El at the new Morgan St station on the Pink Line and then walking one block across to Randolph Street. Website: http://www.girlandthegoat.com/, you can also follow on Twitter and Facebook via the site