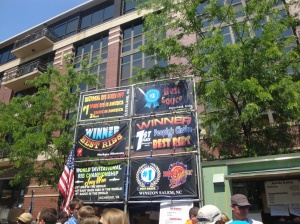 There was a whole lot of rib action and other assorted BBQ offerrings at this years RibFest. I really am no expert in ribs, I pretty much like them to be meaty, and I do like it when the rib meat has flavour and I dont have to rely on the addition of a sauce to make them taste of anything. Although having said that the sauces themselves can enhance and make a difference.

I also love to see my meat roasting away on the grill, so if anyone has stuff thats coming out of a tray at the back I just wont be interested. This year I was really keen to see which of the local vendors would catch my eye. 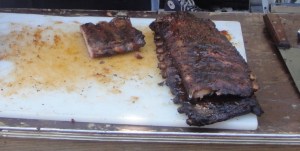 The first place to catch my attention was the Real Urban Barbecue stand and not just because of the sign, it was the guy chopping up the ribs in front of my eyes that did it for me.

I just had a small sampler of their St Louis Ribs and added just a small drop of sauce to dip them into. The ribs were very meaty, the sauce sweet and spicy and the meat fell off the bone. Overall they were pretty good and if I were up in Highland Park I may well call in to try them again. Urban BBQ is located at 610 Central Avenue #177 within Port Clinton Square Highland Park, IL 60035 and they have a Website: http://realurbanbbq.com/ where you can follow them on facebook and twitter.

My next stop was based purely on sight and smell, as I walked along through the hoards my eyes were drawn to some plump sausages on the grill.  I just had to have one. They turned out to be Alligator Sausages from the stall of the Blue Bayou Bar and Grill located at 3734 N Southport Ave. Website: http://www.bluebayouchicago.com.

The Alligator sauasge was incredibly juicy, it was not too spicy, it did have a nice warming aftersense. I had a drop of Lousiana Hot Sauce on the side just to give it a little bit of an extra kick. I would buy a whole load of the sausages for the backgarden grill if I could get hold of some! 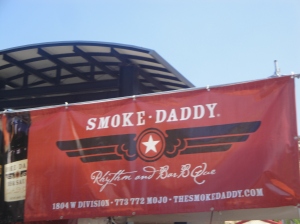 My last recorded sample was from Smoke Daddy, their brick and mortar location is at 1804W Division St in Chicago. Website: http://www.thesmokedaddy.com/ I know that their ribs are award winning but they were not really to my taste. The ribs were very meaty, juicy and the flesh did fall off the bone, but there was not much actual meat flavour, all I got was the wood smoke, which I appreciate is probably the whole point of smoking them. I really needed the excellent sauces to complement or rather create some flavours. They were so smoky that I could still smell the smoke on my hands even after washing several times.

As usual RibFest did not disapoint, and I will look forward to the rest of the rib festivals in Chicago this season