Still in the UK and we were out celebrating both my Mother’s 65th Birthday and on the side St George’s Day. The place of choice for lunch was Browns, it is a bit more upmarket from my usual hot dog, burger, grilled cheese type places that I frequent off the elevated railway, but then again I am back in England and I do have a certain level of class to maintain when at home (‘cough…ahem’) 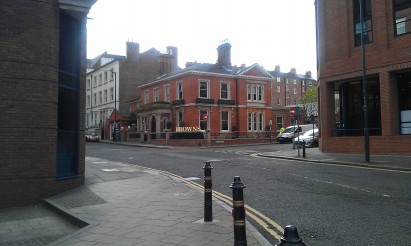 Browns Bar and Brasserie has the tag note “Classic dishes close to people’s hearts since 1973” and it  is part of a small national chain with about 15 sites nationwide in the major metropolis of note, so still small enough to be a cut above most of the rest. Inside it is casual as opposed to posh but not common and it has a easy going non stuffy feeling that is quite relaxing. It also has a little background noise so that you can talk without the world hearing your business and even better without having to listen to the self important droning from adjacent diners. 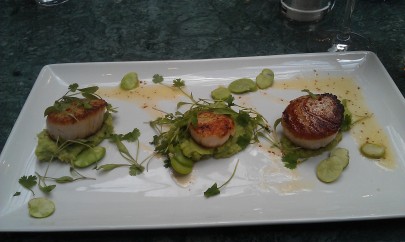 The menu had some of my favorite things on it, but no indication of plate size, having been in the USA for too long I forget the portion size and am always wary of having something too large for a starter. I decided to have the Pan Seared Scallops as I love them. I did not need to worry about the portion size as there was only three and they came on a very artistic plate. Bit fancy really, but nice to have something slightly classier than a Char grilled hot dog. The Scallops were accompanied by a broad bean puree and a wholegrain mustard dressing. Now broad beans are among my least favorite foods of all time right up there with brussel sprouts, but these were quite nice as they were both peeled, and I believe that they were from the new crop and so not yet bitter, they also appeared to be young pea shoots scattered across the plate which were also a nice crunchy contrast to the soft puree. 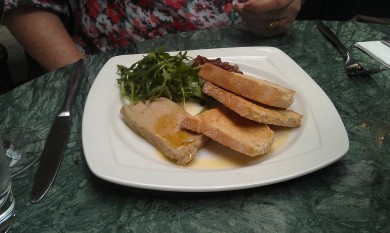 My Mother went for the Smoked Duck Parfait which looked quite nice, I had a little taste and it was quite light and not too overpowering a flavour. It came with Fig relish and toasted rye bread. I tasted the relish and thought it was more like sweet caramelised onion but I must confess I am not a conossieur of figs. It was also accompanied with a small mound of salad of the rocket / arugula variety I believe. Either way there was nothing left at the end so I am assuming it was a tasty offering. 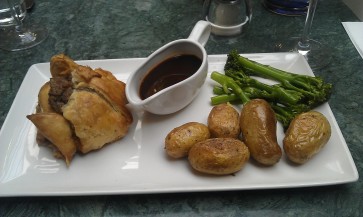 The main course was a no brainer, the special of the day was Beef  Wellington which was quite apt for St George’s day and it is also a family favorite. They told us it would take 25 mins to cook, what they didnt say was that it would take 25 mins to overcook it. Despite that it was a very tasty dish, but  I would have liked it to have been a bit pinker in the middle. We did comment to the waitress that Gordon Ramsey would have sent them back, she did not seem too interested, I guess that is the difference in service between the UK and the US. In America we would have probably got a free pudding, actually we would have been asked how we wanted it cooking in the first place. It came with some crispy roasted new potatoes and some crunchy broccoli florets.  A sort of tomato gravy came to pour over it which was quite a nice thought even if it was a bit sweet. 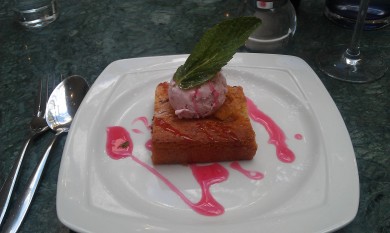 I really didn’t need a pudding which of course meant that I was quite likely to get one.  A White Chocolate & Raspberry Blondie, which is basically a brownie made with white chocolate,  with raspberry coulis and strawberry ice cream magically arrived and was subsequently consumed all my accident. I don’t really remembering ordering it, but I must have done, either that or I ate someone elses pudding.

Overall Brown’s is a really good place for lunch and it had plenty on the restuarant menu and the bar menu to make a return visit worthwhile. Not a 9hr flight return visit, just if one happened to be in the area.