Inspiration or enthusiam arrives in many strange ways.

After two hours searching the remote for my UK DVD player it was finally located under the piles of menus and flyers for unwritten blog entries that I have been putting off for the last few weeks, and in that pile was the remnants of the Christmas M&M’s bought at Times Square M&M world.

Its a stretch to call this food or M&M world a take-out but I am in that frame of mind that I am going to put a (poor) case to that effect. Actually to be honest I am not even going to put a case.

Strolling across Time Square while imbibing the wonderful tackiness I was subjected to some totally ineffctive subliminal advertising. A large Yellow M&M on an electronic billboard pointed at me and 5 minutes later I was inside a Willy Wonka type tackfest staring at tubes and tubes of M&M’s. 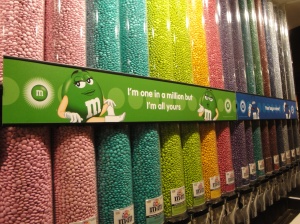 I really don’t like these candies and I certainly can’t stand the Hershey’s chocolate of what they consist, but 15 minutes later I was outside with a yellow taxi tin full of M&M’s which have now all been consumed (without guilt) and I have a cool tin to put the remote into so that I can forget and lose it again.

So OK is M&M world a late night chocolate take out joint, well not really but who cares? It is as shiny and tacky and overpriced as the whole of the rest of  Times Square, and I for one TOTALLY love it. As food blogging goes I know that this hits pretty much rock bottom, so the only way up from here is in fact up..or is it?